The project has already been supported by Alexander Shokhin, the President of the Russian Union of Industrialists and Entrepreneurs (RSPP).

This year, digitalization of the Russian economy has become one of the central themes of SPIEF (Saint-Petersburg International Economic Forum). Specific attention was paid to the two cornerstones of the national economy – the fuel and energy and mineral sectors. While some companies have already implemented technological solutions that allowed them to improve work efficiency, there are still only few examples. Therefore, one of the strategic initiatives of the Russian-German Raw Materials Dialogue concerns establishing a National Educational Center for Digitalization in the Raw Materials Sector.

Two years ago, an agreement on the initiative in the field of digitalization was signed at SPIEF. The signees of the document are Alexander Shokhin, the head of RSPP, and Roland Busch, a member of the Executive Board of the German Committee on Eastern European Economic Relations. The prospects of combining efforts of these two organizations in relation to digitalization of the Russian economy were discussed at the working meeting with Vladimir Litvinenko, the Principal of the Mining University and Co-Chairman of the Russian-German Raw Materials Dialogue. The meeting itself was held on the zero day of SPIEF 2019.

As Alexander Shokhin comments on the outcome of negotiations, "During our meeting with Vladimir Litvinenko, we managed to find multiple opportunities to join our efforts, since both parties have a lot to offer".

In his answer to the question about the prospects of establishing a National Educational Center for Digitalization in the Raw Materials Sector on the basis of the Mining University, Alexander Shokhin affirmed the reality of this initiative.

According to the President of RSPP, "St. Petersburg Mining University has already developed a few worthy solutions in the field of digitalization of raw materials and mining complex. Moreover, the University has been cooperating in this area with key Russian and foreign companies – such as German, Italian, French, British enterprises. Therefore, I have every reason to believe that this new Center will be based in the Mining University rather than anywhere else".

As Mr. Babo notes on the prospects of expanding cooperation, "In my opinion, this idea – the establishment of a National Educational Center for Digitalization – is amazing. Now that we are going through a technological revolution, which will transform the whole industry – those who do not participate in this process will end up losing in the competition. Obviously, the mineral sector is not an exception. Schneider Electric, together with the Mining University, may both contribute to the acceleration of the digitalization processes".

Emmanuel Babo specifically pointed out that Schneider Electric supplies the Mining University with the best equipment and software solutions developed by the French company. By doing so, the level of educational programs for students as well as of career enhancement training provided for the major mining enterprises are generally increased. 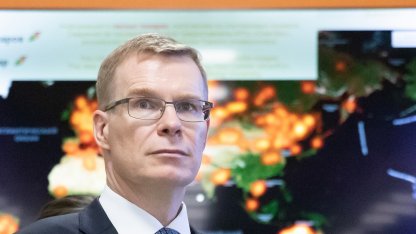 The largest Central European oil and gas company supports an idea that cooperation in the science and technology is the key to prosperous life in the future.
Energetics

As Mr. Babo concludes, "We are still in the very beginning of exploring the full potential of artificial intelligence, simulations, 3D modeling and forecasting. These are the areas in which our joint work will open up a whole new world of possibilities in the future".

A Stone Forensic Scientists in the USSR Could Not Do Without

This dull and rather mediocre looking stone does not fade with time but instead keeps getting prettier.
Environment

Russia Is among Top Study Destinations for Young Mongolians

Ragchaa Byambadorj was born in Mongolia, the country which is still mostly covered by unpopulated deserts and steppes, and where about a third of inhabitants continue practising a nomadic lifestyle. The big question is, why would he want to return home after graduating?
Society

Will the educational system be able to cope with the challenge the coronavirus defied it?

Most Russian educational institutions have bravely reported on a successful transition to online learning. However, reality turned out to be slightly less glowing than officials and heads of educational institutions imagined. Forpost-sz.ru decided to look into the problems that handicap efficient remote communication between teachers and students; whether or not will this format muscle out traditional lectures and classes after the pandemic, and who really has benefited from the forced flight into the digital space.
Science and technics

Many religions suggest that hell is made of this stone. To be fair, its natural deposits often look as if they were the gates to hell. No wonder then the mineral was mentioned even in the Bible.
Environment

The Russian Mineralogy Owes to This Stone

This stone definitely belongs to the world's most beautiful minerals. Collectors from all over the globe are dreaming of getting their hands on it. But once it gets exposed to the direct sunlight, it immediately turns to dust.
Environment

If Heated It Kills

The beauty of this stone killed dozens of scientists. Everyone who attempted to find out what it was made of died painfully.
Environment

The Stone You’d Better Not Touch

This stone consists for almost 90% of one of the most toxic but also highly demanded metals, whose name is lead. Too much lead circulating in the human body triggers inevitable death, which is indeed one of the reasons why galena extraction will be soon put a stop to. But as for now, this mineral is a cause of multiple deaths.
Environment

Dependance on Hydrocarbon Reserves: Is It a Curse or Blessing? Interview with Vladimir Litvinenko, Rector of St. Petersburg Mining University

Is a rich raw-material base 'the Resource Curse' for Russia? Or is it a country's competitive advantage on the global stage?
Economics

New anti-trust legislation policies and sanctions have led to the situation when supply volumes of Russian pipeline gas have almost reached their limits. Is there a way to turn the situation around?
Energetics

Without This Stone, Rembrandt’s Paintings Would Have Never Seen the Light of the Day

For many centuries, ladies had been using this stone to improve their looks. The price they paid was, however, extraordinarily high - it was their own lives!
Environment

Before changing his life drastically and moving to St. Petersburg, Jerson Martínez Parry, a student from Columbia, graduated from the Educational Corporation Indoamericana (Corporación Educativa Indoamericana) and the Institute of Languages and Culture named after Leo Tolstoy (Instituto Cultural León Tolstoy).
Society

The Desert Rose Might Be Not What You Think It Is

The distinctive feature of this stone is its ability to change both the appearance and shape. Throughout the centuries, it remains the most popular building material; it also helps to save human lives.
Environment

A Stone One Can Easily Slice to Pieces

Items made of this stone are a real treasure of Russia. One of the stone’s most amazing features is that anyone can carve a picture or statue of it with a standard kitchen knife. But to do that... one would have to move to Siberia and spend the rest of their lives learning the basics of craftsmanship.
Environment

Every citizen of Israel believes this stone is a country's national treasure. The mystery of stone formation is, however, unclear yet - completely identical minerals in nature do not exist; each sample is unique.
Environment

What Could Be the Use of UNESCO Summer Schools for an Engineering Student?

Scientists and researchers from St. Petersburg are seeking an answer to the question - where do competent in digital transformation engineers come from?
Society

A Stone to Protect from Radiation

This stone is the only mineral in the world that can practically entirely neutralize radiation. In order to recover from serious illnesses, many people are even ready to eat it.
Environment

A Stone of the Strategic Importance to the US

In its gorgeousness, this stone is no inferior to precious sapphires. However, only geniuses are capable of cutting it. In 1984, the U.S. Congress recognized deposits with it as “strategic” for the country. In Russia, its production to date is only in plans.
Environment

Only One Olympic Champion Through the Whole of the Country’s History. Why?

Quin Anh Do lived the first 12 years of her life in Yaroslavl. Right away after returning to her historical homeland, the girl began to dream of going back to Russia. What is the reason?

14:26From Turkmenistan to Russia with Studies in Mind
Society
Loading...

23:00A Stone to Save Heavy Drinkers
Environment
16:32The Most Expensive Stone of the XX Century
Environment
Loading...

18:06Are Hydrocarbons a Curse or Foundation for the Global Economy?
Science and technics
Loading...

13:45A Stone That Can Change Its Colour Right before Your Eyes
Environment
Loading...

23:54How Does It Feel to Study in Russia for an African Student from Côte d’Ivoire?
Society
13:44A Stone That May Help to Recover from a Brain Stroke
Environment
Loading...