Zimbabwe will improve the skills of its engineers in Russia

Zimbabwe will improve the skills of its engineers in Russia

The government of the state, which located between the Victoria Falls and the Limpopo River, is going to train highly qualified mining engineers in St. Petersburg and look for "new ways to develop the education".

On Wednesday, March 27, the plenipotentiary representative of the Government of the Republic of Zimbabwe, Patrick Ndlovu, and the Chairman of the Governing Council of the International Competence Centre for Mining-Engineering Education under the auspices of UNESCO, the Rector of St. Petersburg Mining University, Vladimir Litvinenko, signed a cooperation agreement. According to this document, the Zimbabwe School of Mines is becoming a flagship university of the Centre in the South African region. Its main tasks will be improving the skills of specialists working in the mineral resource sector of the country and neighboring states, as well as expanding the academic and scientific partnership.

Paradoxically, Russia and one of the poorest countries in the world have a lot in common. For example, the US also imposed sanctions on Zimbabwe. On March 5, 2019, US President Donald Trump prolonged them for another year. Restrictive measures affect more than 140 citizens and organizations, including the current President Emmerson Mnangagwa. In addition, there are many mineral deposits in the Republic, and the mining industry is one of the leading branches of the economy.

However, the differences are much greater. The unemployment rate in Zimbabwe is 80-90%, external debt exceeded 2 billion USD, and inflation reached 42%. The highest inflation rate since 2008, when the world anti-record was established in this state – then the prices of goods and services grew hundreds of millions of times. In 2009, due to this, the country had to abandon its own currency and switch to settlements in the American dollar.

Such a non-standard move not only saved the economy but also caused a real boom in the mining sector, whose growth in 2010 was about 47%. Currently, its contribution to the GDP of the Republic is about 9% and continues to increase. According to experts, the dynamics could have been even more optimistic, except for one thing. Namely – a critical shortage of qualified engineers, which, as in many other African countries, hinders economic development.

«In Zimbabwe, more than 40 types of minerals are mined, such as gold, nickel, copper, diamonds, and coal. We count on the assistance of Russia and UNESCO in reforming our mining industry by increasing the competence of engineers and implementing advanced technologies. Today we have demonstrated our desire to empower the Mining University and those who cooperate with it at the platform of the International Competence Centre, to improve the quality of education in our country. Furthermore, we would like to attract scientists from Petersburg university to geological exploration and the implementation of the advanced research in metallurgy», said Mr. Ndlovu.

He confirmed that this concerns both internships for African students and advanced training courses for teachers of the Zimbabwe School of Mines and specialists for mineral companies. As well as, the parties have agreed to establish a Scientific Center for Analytical Studies of the Material Composition and Genesis of Rocks.

«Investments in the mining industry of Zimbabwe is a very promising direction. In addition, we, as an International Competence Centre under the auspices of UNESCO, are interested in implementing the Sustainable Development Goals proclaimed by the United Nations. Among them – the widespread eradication of poverty and hunger, access to water and sanitation and obtaining a quality education. We will be happy to contribute to sustainable development of the African continent, for many regions of which this is a very urgent task», said rector of Saint Petersburg Mining University Vladimir Litvinenko. 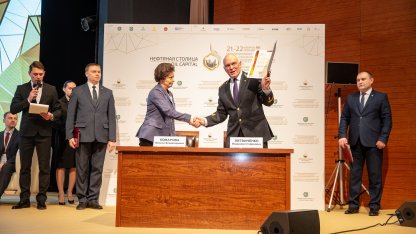 This organization will, in particular, draw the map of the geological structure of the South African region. Its appearance will allow not only to establish inter-university cooperation but also to attract the business of both countries to the project.

LUT University is now the key partner university in Finland for the International Competence Centre for Mining-Engineering Education under the auspices of UNESCO.
Society

A Stone Fortune-Tellers Can’t Do Without

This mineral is one of the most common ones on our planet, with its crystals weighing up to several dozens of tons and often being enormously large.
Environment

A Stone to Save Heavy Drinkers

This stone is a real treasure for it can relieve symptoms of those suffering from hangover or alcohol intoxication.
Environment

The Most Expensive Stone of the XX Century

A stone whose price never ceases to amaze is a true sensation of the last century. This treasure is listed in the Guinness Book of Records. Its name even relates to the Nobel Prize in Physics.
Environment

Why Do Ecuadorian Youth Tend to Choose Russian Universities?

There are large oil reserves in Ecuador but not enough specialists who know how to work with modern technologies. Therefore locals, if an opportunity emerges, choose to study abroad.
Society

A Stone That Can Change Its Colour Right before Your Eyes

Collectors all across the globe are willingly paying hundreds of thousands of dollars for some samples of this stone. And the fact the samples they buy may easily lose their attractiveness does not seem to stop them.
Environment

How Does It Feel to Study in Russia for an African Student from Côte d’Ivoire?

Life has become a success story for a young man from Côte d'Ivoire. As a child, he used to help his family on corn plantations. Some 15 years later, he is a PhD student at St. Petersburg Mining University who got a chance to shake hands with a Nobel laureate in physics.
Society

A Stone That May Help to Recover from a Brain Stroke

While this stone can help in curing cancer or with recovery from a heart stroke, it can, on the opposite, prevent a person from resisting the mildest diseases.
Environment

What Difficulties Iraqi Kurds Face When They Arrive in Russia to Study?

An Iraqi Kurd has told the story of how he ended up studying at Saint-Petersburg Mining University. What is he doing to preserve his cultural identity on the way to fulfilling a lifetime dream - to become an oil & gas specialist?
Society

A Stone Forensic Scientists in the USSR Could Not Do Without

This dull and rather mediocre looking stone does not fade with time but instead keeps getting prettier.
Environment

Russia Is among Top Study Destinations for Young Mongolians

Ragchaa Byambadorj was born in Mongolia, the country which is still mostly covered by unpopulated deserts and steppes, and where about a third of inhabitants continue practising a nomadic lifestyle. The big question is, why would he want to return home after graduating?
Society

Will the educational system be able to cope with the challenge the coronavirus defied it?

Most Russian educational institutions have bravely reported on a successful transition to online learning. However, reality turned out to be slightly less glowing than officials and heads of educational institutions imagined. Forpost-sz.ru decided to look into the problems that handicap efficient remote communication between teachers and students; whether or not will this format muscle out traditional lectures and classes after the pandemic, and who really has benefited from the forced flight into the digital space.
Science and technics

Many religions suggest that hell is made of this stone. To be fair, its natural deposits often look as if they were the gates to hell. No wonder then the mineral was mentioned even in the Bible.
Environment

The Russian Mineralogy Owes to This Stone

This stone definitely belongs to the world's most beautiful minerals. Collectors from all over the globe are dreaming of getting their hands on it. But once it gets exposed to the direct sunlight, it immediately turns to dust.
Environment

If Heated It Kills

The beauty of this stone killed dozens of scientists. Everyone who attempted to find out what it was made of died painfully.
Environment

The Stone You’d Better Not Touch

This stone consists for almost 90% of one of the most toxic but also highly demanded metals, whose name is lead. Too much lead circulating in the human body triggers inevitable death, which is indeed one of the reasons why galena extraction will be soon put a stop to. But as for now, this mineral is a cause of multiple deaths.
Environment

Dependance on Hydrocarbon Reserves: Is It a Curse or Blessing? Interview with Vladimir Litvinenko, Rector of St. Petersburg Mining University

Is a rich raw-material base 'the Resource Curse' for Russia? Or is it a country's competitive advantage on the global stage?
Economics

New anti-trust legislation policies and sanctions have led to the situation when supply volumes of Russian pipeline gas have almost reached their limits. Is there a way to turn the situation around?
Energetics

23:00A Stone to Save Heavy Drinkers
Environment
16:32The Most Expensive Stone of the XX Century
Environment
Loading...

18:06Are Hydrocarbons a Curse or Foundation for the Global Economy?
Science and technics
Loading...

13:45A Stone That Can Change Its Colour Right before Your Eyes
Environment
Loading...

23:54How Does It Feel to Study in Russia for an African Student from Côte d’Ivoire?
Society
13:44A Stone That May Help to Recover from a Brain Stroke
Environment
Loading...

22:50What Difficulties Iraqi Kurds Face When They Arrive in Russia to Study?
Society
Loading...

00:26A Stone Forensic Scientists in the USSR Could Not Do Without
Environment
Loading...
Об изданииПодпискаК началуСтатьи