Japan and Russia intend to cooperate on hydrogen energy

Japan and Russia intend to cooperate on hydrogen energy

Mr. Koji Toyoshima, the head of the Moscow representative office of the Japanese National Oil, Gas and Metals Corporation JOGMEC visited St. Petersburg Mining University. During the meeting with the rector Vladimir Litvinenko he discussed the prospects of the partnership between the parties in such areas as scientific support of the company’s projects in our country, as well as research in the field of transportation and storage of hydrogen.

Koji Toyoshima pointed out that JOGMEC has been represented in the Russian market for quite a long time. For example, for more than 10 years it has been cooperating with the Irkutsk Oil Company that develops fields in Eastern Siberia. According to the guest from Japan, this business will be in demand for many years to come. Despite the boom in the construction of wind turbines and solar panels all over the world, they cannot replace fossil fuels as the basis of the global energy balance at this stage of technology development.

Vladimir Litvinenko told about the plans to build an energy technology testing facility at the site of the Mining University's science and educational base in Sablino. It is needed for testing the equipment designed for drilling oil and gas wells, as well as conducting research related to hydrogen production, transportation, and storage. 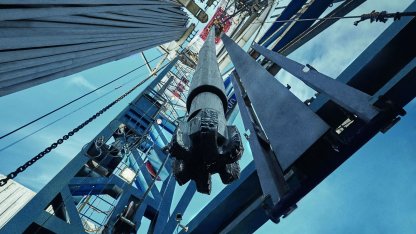 A test site for energy technologies may be built in Sablino. It is necessary for testing the equipment designed for drilling of oil and gas wells, as well as the development of hydrocarbon deposits. Forpost decided to find out what this project is about, whether domestic companies are interested in it, and why they decided to implement it just near St. Petersburg.
Energetics

Mr. Toyoshima showed great interest in this idea and emphasized that scientific research related to the lightest gas in nature is a highly sought-after area today. The parties discussed the prospects of Japanese participation as one of the investors in the creation of the testing ground. In addition, the head of the Moscow office of JOGMEC announced plans to engage scientists of Mining University in a number of Russian corporate projects for their scientific support.

He also told Vladimir Litvinenko that he was aware of the upcoming Russian-German mineral resources forum initiated by St. Petersburg Mining University. Koji Toyoshima called such conferences “the foundation for the formation of the energy structure in the future.” And he expressed the hope that in the foreseeable future our states will have a similar platform, where they could discuss bilateral cooperation in the field of energy.

Vladimir Litvinenko: reducing investment in oil and gas will only lead to a further increase in their cost

The world public and the media continue to discuss the scandalous statement of experts of the International Energy Agency (IEA), which proposed to stop financing new projects related to the exploration and development of hydrocarbon deposits. Most analysts believe that this will not lead to an acceleration of the energy transition and reduction of human impact on nature, but only to a shortage of resources, an increase in their cost, and, as a consequence, a decline in the quality of life in developing countries. The result of this state of affairs will be an increased role of “dirty”, but cheaper technologies for power generation.
Energetics

Konstantin Simonov: “The green energy industry is looking more and more like a classic stock bubble”

Is it possible to predict the future of global energy? Are oil and gas really a dead horse that needs to be abandoned immediately? What will result from the colossal expenditures of some states on the construction of wind turbines and solar panels: a reduction in the technological impact on ecosystems or a sharp increase in the price of electricity and heat?

How to build a career in the oil and gas industry

Working in the Far North or in an office in St. Petersburg? Onshore or offshore field? On the staff of a foreign or Russian company? The mineral and raw materials complex of Russia provides differentiated scenarios of career development for core specialists. Viktor Feller, a graduate of St. Petersburg Mining University, has had time to work on various projects and today holds the position of Chief Expert of Offshore Projects Expertise Department at PAO Gazprom.
Society

In St. Petersburg they argued about the causes of the Fukushima accident

The leitmotif of almost all debates on the introduction of environmentally friendly methods of extraction, processing, and use of raw materials is the discussion of technologies not even of tomorrow, but of the day after tomorrow. At the same time, insufficient attention is paid to the innovations that are available right now. Such a conclusion was made by the experts who took part in the panel discussion “Environment and technical progress: balance of interests.” It was held at St. Petersburg Mining University as part of the forum contest for young scientists “Topical Issues of Subsoil Use.” The conference brought together over a thousand students, postgraduate students, and experts from 48 countries.
Energetics

Who can save the Mariinsky theater from destruction

In 1805 the first Russian textbook on mine surveying “Practical underground geometry” was published. This was a turning point in the formation of the specialty, without which 200 years later it is impossible to imagine either the development of minerals, or construction of subway lines, or the construction of underground passages or mine shafts.
Society

St. Petersburg Mining University hosted a presentation of the book Learning to Love Russia by Hans-Joachim Frei, German director, founder and continuous director of the famous Dresden Opera Ballet. It is unique not only because it presents the opinion of a foreigner about our country and the people who live here, but also because the foreword for it was written personally by Vladimir Putin.
Society

Classic-Type Museum to Die Out. Museums of a New Kind Making Billions of Dollars

It has been decades since museums, along with books and theatre, were foretold to cease to exist. COVID-19 has indeed contributed to the debate regarding the "things of the past".
Society

British scientists have revealed that breathing causes lead compounds to form within disposable face masks. It reminds of Vladimir Mayakovsky's lines, "as our days entered the water pipe, worked by the slaves of Rome". Which is a typical example of how lead pipes bring about a decline in the population's average life expectancy.
Society

To get an idea of how Earth looked like in the distant past, one just has to look attentively at today's living creatures. Some ancient animals still resemble their progenitors. Some organisms are no longer found. The others have survived without losing their original form.
Culture

Politicians, scientists, and business representatives from our country and Germany, who spoke at the opening ceremony, spoke in favor of the development of partnership, despite the U.S. sanctions.
Energetics

Will the European green deal destroy the partnership between Germany and Russia?

In 2019, the EU decided on a new economic development strategy that aims to achieve carbon neutrality by mid-century. This means that the demand for coal, oil, and gas from European countries will be reduced to zero in less than 30 years. Is this possible in principle? And how will Brussels’ plans transform the Old World’s partnership with our country? After all, for the most part, we export hydrocarbons and refined products there.
Energetics

On How Tsar-Liberator Reformed Mining Institute

In mid-June 1866, Alexander II approved the new charter of the Mining Institute. It was an event of particular importance to the institution, being inferior only to its foundation, which dates back to October 21, 1773. What changes did the Emperor of Russia, known for abolishing serfdom and reorganising the country's judicial system, make?
Society

Coal Mining in Germany: “No-One Can Forbid to Think Logically”

Maxim Vorona, a graduate of Mining University, now a top manager at MIBRAG Consulting, part of the Germany-based coal producer MIBRAG, talks on business transformation amid the transition to a low-carbon economy.
Society

Another German Week has started in St. Petersburg. Every year hundreds of events and interactive projects - film screenings, concerts, exhibitions, seminars, and business forums - take place within the framework of this project. Forpost decided to find out whether Germans are in reality interested in developing economic, cultural, and scientific relations with Russia and, in particular, with the city on the Neva? Or is it more of a tribute to a tradition that will soon die out?
Energetics

Why Alekperov asked Putin to bring back benefits for oil workers

The Ministry of Finance has opposed the introduction of tax incentives for high-viscosity and extra-viscosity oil fields before 2024. According to the officials, it will lead to a loss of budget revenues. Forpost decided to find out why this raw material, which in its commercial appearance looks like very thick black honey, is important for the national economy and why in the Komi Republic it is extracted from not a well, but a mine.
Energetics

On 17 April 1834, Alexander II of Russia turned 16. He had received countless gifts: a collection of historical medals, Turkish swords, even Alexander Brullov's paintings. Yet, they were nothing compared to an unexpected gift handed by a famous Finnish chemist.

Expert commented on plans to replace natural gas with hydrogen

Bloomberg News Agency has published a report “Prospects of hydrogen economy” in which it is stated that already in thirty years the lightest gas in nature will cost no more than methane - from 220 to 440 dollars per thousand cubic meters, depending on the place of production. Steel mills, cement factories, automobiles, and ships will opt for environmentally friendly fuel and cut their harmful emissions by a third.
Energetics

06/18/2021 - 11:48Separate Waste Collection Is a Bonanza. So Why No Interest?
Society
06/15/2021 - 13:44Vladimir Litvinenko: reducing investment in oil and gas will only lead to a further increase in their cost
Energetics
06/08/2021 - 15:33Konstantin Simonov: “The green energy industry is looking more and more like a classic stock bubble”
Energetics
06/08/2021 - 14:32The contest of young scientists in St. Petersburg has come to an end
Science and technics
06/08/2021 - 14:26Mining University will create an engineering center to train geologists
Economics
06/04/2021 - 20:37Caterpillar Plans to Develop Cooperation with Mining University
Society
06/04/2021 - 10:19GECF Secretary-General Visits Mining University
Energetics
Loading...
Об изданииПодпискаК началуСтатьи