The contest of young scientists in St. Petersburg has come to an end

The contest of young scientists in St. Petersburg has come to an end

More than a thousand undergraduate and graduate students from 48 countries took part in it. Most of them made presentations of their projects in the online format, but delegates from Russia, Belarus, and Kazakhstan came to the city on the Neva in person.

The Closing Ceremony of the International Forum Contest “Topical Issues of Subsoil Use” took place at St. Petersburg Mining University on Friday, June 4. Over a hundred people became laureates in 18 nominations. Such an impressive figure is due to the fact that the organizers do not position the conference as a competition. Rather, it is a platform where future engineers and scientists can present the results of their research to the expert community, hear their professional evaluation, as well as get acquainted with the directions and level of research of their peers from other countries.

What interests young people today who plan to link their careers with science? As always, one of the central topics is increasing the efficiency of mining and energy companies. For example, by means of digitalization or the adaptation of advanced technologies at enterprises. In addition, every year more and more reports are devoted to reducing the anthropogenic impact on ecosystems. In particular, waste management, water purification, and restoration of disturbed lands.

For example, representatives of the Belarusian National Technical University (BNTU, Minsk) Nikita Yesman, and Tatiana Astapenko, who won the contest, work on the reduction of geo-ecological damage when storing halite waste. This is an unavoidable by-product of the processing of potassium ores, a raw material for fertilizer production. The young scientists propose to reduce the level of pollution of nature by using and improving the method of hydraulic reclamation.

“In the process of reclamation, the halite tailings are compacted, which allows saving up to 40% of the sludge storage area. Thus, the subsoil user has less impact on the environment by increasing the specific volume of waste storage per unit of land area,” explained Nikita Yesman.

Anna Dudina from St. Petersburg Mining University is working on a digital model of one of Norilsk Nickel’s mines. This is necessary in order to confirm raw material production forecasts and improve logistics.

“The simulation model allows us to optimize the number of machines and rigs to be used in the mine, avoiding their downtime and losses associated with an inefficient use of the transport fleet,” said Anna Dudina.

The digital modeling software, which was created at Mining University last year, allows doing this work. Powerful computers build a three-dimensional model of a mine, quarry, or enrichment plant, and within a few days, they calculate the behavior of equipment and the entire production cycle, which in reality can take from 20 to 30 years. However, there is no way to do that without human participation - a scientist must have all the data about the object so that the model reflects not only the geometry but also the physical properties of the deposit. Equally important are the competencies of the project author, which will allow him to correctly interpret the information obtained.

During the closing ceremony of the International forum contest, the rector of Mining University Vladimir Litvinenko said that its winners gain several competitive advantages at once. Firstly, they get the right to enter graduate school at the university in St. Petersburg, and secondly, they get free participation in one of its summer schools. Thirdly, they will be given priority when an application for a grant of the international program “Management of Subsoil Use Objects” is considered. It provides for a master’s degree at one of the Mining University's foreign partners - in Austria, Great Britain, China, or Finland.

It is worth mentioning that besides the contest, the program of the conference included excursions to the enterprises of St. Petersburg and the Leningrad region, the case championship, lectures of important engineers and scientists. Among them were Sergey Serdyukov, ex-Technical Director of Nord Stream, expert of the Russian Federation Council, Holger Schulz, General Director of CAT distributor Zepellin Rusland, Roman Samsonov, Vice President of the Russian Gas Society, and many others.

Many prominent experts attended the conference, including Jean-Paul Ngomé Abiaga, Advisor to the Director-General of UNESCO in Science; Charles Hendry, Chairman of the Board of Governors of the Russo-British Chamber of Commerce, former Minister of Energy of the United Kingdom; Peter Moser, Vice-Rector of the Leoben Mining University (Austria); Konstantin Simonov, President of the National Energy Security Fund; Colleen Church, Executive Director of the Institute for Materials, Minerals, and Mining (IOM3, UK) and many other.

In St. Petersburg they argued about the causes of the Fukushima accident 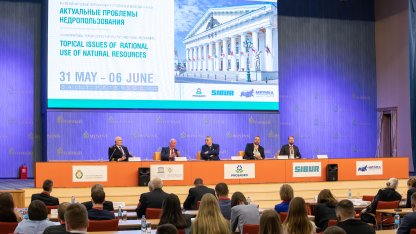 The leitmotif of almost all debates on the introduction of environmentally friendly methods of extraction, processing, and use of raw materials is the discussion of technologies not even of tomorrow, but of the day after tomorrow. At the same time, insufficient attention is paid to the innovations that are available right now. Such a conclusion was made by the experts who took part in the panel discussion “Environment and technical progress: balance of interests.” It was held at St. Petersburg Mining University as part of the forum contest for young scientists “Topical Issues of Subsoil Use.” The conference brought together over a thousand students, postgraduate students, and experts from 48 countries.
Energetics

Let us remind that the forum, which is held annually at St. Petersburg Mining University, was organized by the International Center of Competence in Mining Engineering Education under the auspices of UNESCO. SIBUR and PhosAgro traditionally acted in the role of its partners.

You can see all the photos from the events held during the forum here.

Belarusian and Armenian Students about Summer Schools at Mining University: “This Is Absolutely Fantastic!”

Mining University has resumed summer school programmes following the last year's break caused by the pandemic. Upon completing the studies, some of the participants have already left for home. What is their opinion on the educational programmes, practical training opportunities, and the organisation of the learning process as a whole?
Society

Mining University Informs about the Tasks of Its New Research Centres

The samples of bottom deposits from the Okkervil river "suggest an ecological disaster".
Environment

It is extremely undesirable to burn them as ordinary firewood since it is dangerous for the environment and for the health of those who get into the area where the products of combustion spread.
Science and technics

Russian Railways has already become interested in the new preventive trains because the problem of efficient transportation of coal, crushed rock, iron ore, and other raw materials during the winter period has not yet been fully solved.
Science and technics

The Rector of the first higher technical university in Russia talks about the institution's efforts to create a positive educational environment.
Science and technics

Will Russian students who received a European diploma go to the West?

Four students of St. Petersburg Mining University have defended their Master’s degree theses under the triple diploma program “Modern methods of development of mineral resources.” Now each of them will become the owner of three certificates of higher education at once: from the Freiberg Mining Academy (Germany), the Leoben Mining University (Austria), and their alma mater.
Society

In The Tale of Tsar Saltan, Alexander Pushkin wrote about a squirrel cracking wondrous nuts. It is not by chance that the gemstones appeared in the fairy tale. In August 1931, when Pushkin finalised his poem, Saint Petersburg had been already taken over by the 'emerald fever'.
Culture

The cost of coal in Europe passed the mark of $120 per ton, and in Asia - $130. Such high prices have not been recorded on the stock exchanges for about ten years, and experts warn: this is not the limit. The demand for the resource will continue to grow, and if the specialized companies do not increase the level of production, then the quotes will be doomed to further growth. Forpost decided to find out how the current situation correlates with the struggle for environmental protection and whether it will raise the head of the industry, which only recently was predicted to die soon.
Energetics

RZD, alongside Mining University, are working together to implement a technology for managing wastewater residuals.
Science and technics

On Why Mongolia Winning Battle for China’s Coal Market

China imposed a ban on coal exports from Australia late last year. Canada, the US, Russia, and Indonesia expressed their interest to replace its market share. Yet, it was Mongolia that became the leader of the race. The vice president of one of the country's largest mining companies, MAK, spoke on where the profits from coal sales would go to.
Society

The Lifting of the US Anti-Iranian Sanctions: What Next? The Opinion of a Shiraz Oilman

Mahmoud Vaezi, head of the Iranian presidential administration, announced that Washington had agreed to lift sanctions on all economic issues. The head of the Iranian-Russian Center for Academic Cooperation, one of Iran’s largest universities, commented on what the first steps would be after they had been lifted.
Society

The oilman who stopped “fuelling with money”

In the second half of the 19th century, Azerbaijan became the center of the world’s hydrocarbon production. However, the mass development of “black gold” deposits threatened with frightening consequences. After direct distillation of Baku oil, the yield of the main commercial product, kerosene, was a little more than 30%, and the rest was called “oil waste.” They were simply poured into the sea or burned...
Society

People in Russia are generally irritated at seeing fuel prices rising. There is a reason: we have a plethora of hydrocarbons, and we have learnt how to extract them on an industrial scale back in the Soviet times.
Energetics

Electricity consumption will soon be controllable via a smartphone app. Reality or utopia?

When will there be apps on our smartphones that allow us to optimize the consumption of electricity in the apartment and, as a result, save on payments? How much will the pandemic affect the global fuel and energy complex? Is the degree of wear and tear of the energy infrastructure in our country high, and what is the most effective way to modernize it? A group of Russian and French scientists gave answers to these and other questions in their research published in the highly-rated scientific journal Energy Reports.
Energetics

09:28Belarusian and Armenian Students about Summer Schools at Mining University: “This Is Absolutely Fantastic!”
Society
Loading...